(I had to edit the title twice, as I never found the time to finish this article. :D)

I have now been living in Denmark for five months. And everyone is so relaxed, I have never had a stressful day so far. Seriously, people in Denmark are far more relaxed than Germans become on their best days. Everything is digital here and good wifi is common. And the train system actually works!

When I came here, I was surprised by the possibility to pay contactless with my card. Paying is very different compared to Germany. Cash isn’t used a lot while card payments, or payments using an app called MobilePay, are common literally everywhere. Even if you are at Copenhagen Main Station and you need to go to the toilet. Of course you just take your card and wave it in front of the reader and you go in. But not only near the trains you can pay with cards, you can also buy drinks from vending machines on the faster Eurocity (EC) trains. You just insert your card and choose from one of three buttons. It does not get any more simple. Often you will find signs at the entrance of restaurants telling you that they take „CASH ONLY“. And it is in English, because not the Danes use cash, but the tourists. Sometimes you even see signs „No US-Dollar“. Danes seem to think „Why bother getting cash to the bank account by carrying it to the bank?“ and simply let you make card payments. The app MobilePay is often used for small purchases. Often you will see a basket filled with apples from someone with an apple tree standing along the road, but it could also be a box filled with books or anyting else. A slip of paper says MobilePay and a number with 8 digits. This is a Danish mobile phone number. You just take an apple and send some money to the seller using their number and then walk away with your apple.

But that is not the only thing that showed me how modern Denmark is. Being gay is perfectly normal in Denmark and people don’t really seem to hide. Even in the school where I’m currently volunteering, you can see gay couples holding hands and all that stuff. It is not like in Germany where they would bully their classmates for that. In fact, it seems to be a thing nearly everyone agrees upon: There is nothing wrong with LGBT* people, a lot more people think that than in Germany or the UK. I have talked to the teachers about that and apparently they don’t have bullying in Denmark. You are just the way you are and others just let you be like you are. That is jolly good!

It is also quite common to see a lot of people with rainbow bags and other things with rainbow on them. That I have never seen in Germany, there it is not common. Just like the good mobile networks here. I just happen to have connection all the time, everywhere and even on trains in tunnels. Most of the time I have a 4G connection, sometimes it drops to 3.5G. I pay around 13 € / month and get 10 hours to call 50 countries, 3000 texts and 60 GB of data. And I use it: Just last month I used all the data.

Some of the usage happens while being on the train to the next amateur radio clubstation. Located in Amager which is a part of Greater Copenhagen, OZ7A is a clubstation in a small shack and with an antenna tower. There I am often on Thursdays to chat and contact the world. Often I talk to friends and this is my way to stay in contact with Germany. Sometimes I reach someone in Sweden and then I practise my Swedish a little.

Speaking of train travel, that is really simple in Denmark. Comparable to the Oyster Card, the Rejsekort is a simple RFID-based system. Rejsekort literally means ‚travel card‘ and I could not have chosen a better name. You can use the card for all means of public transport. Be it trains, busses, ferries or even the metro: This is the way to travel. Since I have not yet used the card for anything else than trains, I can only report about that. Usage of the card is pretty straight forward. You wave it in front of a reader labelled ‚check in‘ on the platform. Then you get on a train and when you change trains, you simply check in again. At the end of you journey, you go to a reader labelled ‚check ud‘ to check out. The system knows which trains you have taken and automatically takes the lowest price for that journey from the card. I wonder if we will ever get anything similar in Germany. Best of all: The trains are not dalayed all the, like in Germany. 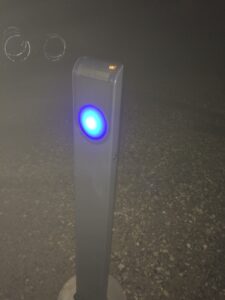 Terminals of this kind are used to check in and out when travelling by train. 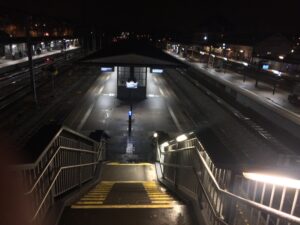 A typical train station in Denmark. 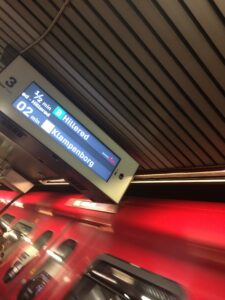 But people of ask what I do all day. Since I’m doing a voluntary service at a school, I’m doing school related tasks. Some examples include checking rooms of the pupils, giving them everything they need to clean their rooms, being present in German lessons and supporting there (they somehow think I am competent in German, no idea where they got this idea from), helping the caretaker tidying up and throwing old stuff out and a lot more of similar tasks. I have even taken down an old antenna mast from the roof. A storm destroyed the unused antennas, so it was chopped of and the antennas landed in trash. I also replaced some lamps in rooms, some were old and fell apart.

I will continue to be here until June and I hope to find the time to write one or two more articles before I leave.